The base X7 gets a power boost, and the flagship Alpina XB7 blasts to 180 mph.

The BMW X7 – Bavaria’s biggest, boldest, best-selling SUV – is due for an update after five years on the market. For 2023, BMW designers tweaked the X7, giving it a sportier front end, minor updates to the rear, extra power in the base model, and a revamped cabin with the latest and greatest technology inside.

Talking about the face first, BMW split its traditional headlight fixture in two for 2023. This dual lighting setup will be the new staple for full-size BMW models, eventually making its way to the electric i7 and 7 Series sedans, as well as the XM hybrid crossover.

On the X7, the LED running lights sit up top near the hood line while the actual headlights live lower down on the bumper. The goal of this look, BMW says, is to emphasize the X7’s upright stance. Beyond that, the lower fascia on the xDrive40i model sports a new shiny silvery trim that juts up from the base of the bumper, while the updated kidney grille wears darkened slats within a brighter chrome surround. And new for 2023: a Cascade Lighting element within the grille itself, a la Rolls-Royce.

The sportier X7 M60i forgoes chrome for a gloss black treatment instead. The kidney grille and lower vents wear the monotone black, while the headlight fixtures have a darkened sheen that gives them a more aggressive look. And as expected, an M badge lives on the left-hand side of the grille.

To go with that bold new styling, BMW added 14 colors to the palette. Sparkling Copper Grey metallic – pictured here on the xDrive40i model – is one of those new hues, joined by M Marina Bay Blue metallic as pictured on the M60i, with other BMW Individual finishes like Ametrin, Dravit Grey, Tanzanite Blue II, and Frozen Pure Grey also available.

Buyers can also option their X7 with a BMW M 50 Years emblem, which looks something like this. And for the first time ever on a BMW product, 23-inch wheels are available. The base xDrive40i model uses standard 21-inch wheels, the M60i rides on 22-inch alloys, and the 23-inch BMW Individual light-alloy wheels are also available on the top-end model.

The 2023 X7 still offers the same two engine displacements as last year: a base 3.0-liter inline-six and an optional twin-turbocharged 4.4-liter V8. But now, both engines get a 48-volt mild-hybrid assist. The base inline-six has been improved significantly with a 40-horsepower boost, and an extra 52 pound-feet of torque. That gives it a total output of 375 hp and 383 lb-ft. With that, the X7 xDrive40i can now hit 60 miles per hour in 5.6 seconds.

The twin-turbo V8 unit still has the same robust 523 hp and 553 lb-ft as last year, enough to propel the M60i model to 60 in 4.5 seconds. And at the top of the range, the Alpina XB7, with its tweaked twin-turbo V8, produces 630 hp and 590 lb-ft, launching it to 60 in 4.0 seconds and on to a limited top speed of 180 miles per hour. Every version of the X7 for 2023 also features a new eight-speed automatic transmission with a launch control function.

Inside the new X7 is BMW’s latest iDrive 8 infotainment system. Consisting of a 12.3-inch digital instrument cluster and a 14.9-inch touchscreen, both hidden behind a beautiful curve display, iDrive 8 makes its way to a gas-powered BMW for the first time. Thus far, iDrive 8 was only available on the electric iX and i4.

The iDrive 8 interface is a brand-new system compared to the outgoing 7, with a sleeker interface, a more streamlined home screen, and additional features. Things like voice and gesture control, meanwhile, carry over from the previous model.

Multi-contour seats are now standard on the X7, with standard heating functionality for both the driver and front passenger. Previously, both of those were options. Massage and ventilation functions can both be added as an option, and BMW’s vegan Sensafin faux leather is standard in the xDrive40i model. The M60i gets a standard Extended Merino leather, which is also available as an option on the base model.

When it comes to moving an affluent family, there’s no better BMW than the X7, the brand’s luxurious three-row SUV. While its cargo area and rearmost seats aren’t as spacious as rivals such as the Jeep Grand Wagoneer and Mercedes-Benz GLS-class, the Bimmer boasts better driving manners as well as an impressive selection of engines. They range from a 375-hp turbo-six to a 523-hp twin-turbo V-8, with the latter making 630 horses on the highest-class, max-performance Alpina XB7.

All models have all-wheel drive and an adaptive air suspension that promotes a pillow-like ride. The 2023 X7’s interior is serene, but it’s also packed with upscale materials and modern tech such as the dash’s giant curved glass display. Those features, combined with the X7’s towing capability and an array of standard active-safety tech, make the biggest BMW one of the best.

The 2023 X7 receives a mid-cycle refresh that includes a more expressive front end and a new dashboard design with a huge digital display and BMW’s latest infotainment system. The largest BMW SUV also has more standard features and new driver-assistance technology. For the first time, BMW will offer a set of 23-inch rims, too.

The X7 also benefits from updated powertrains. The xDrive40i’s turbocharged six-cylinder now makes 375 horsepower (up 40) and up to 398 pound-feet of torque (up 67). The V-8 model’s name changes from M50i to M60i, and its new twin-turbo 4.4-liter and 48-volt hybrid system are claimed to form a more efficient duo. When the Alpina XB7 arrives, it’ll have an even more powerful setup than the M60i that makes 630 horsepower–18 more than before.

Even with our fondness for the twin-turbo V-8’s 523 horsepower and noteworthy performance, we’d recommend the X7 xDrive40i. It has desirable standard features that include four-zone climate control, a panoramic sunroof, power-adjustable front seats with memory settings, heated front seats, a power tailgate, and more. We’d also add one of the Vernasca leather upholstery choices and the Premium package that includes a head-up display, gesture controls, and soft-close doors.

The entry-level X7 xDrive40i is powered by a 375-hp turbocharged inline-six-cylinder, and the M50i has a twin-turbo 4.4-liter V-8 that makes 523 horses. The Alpina XB7 has a specially tuned version of that V-8, which develops 630 horsepower. All three engines pair with an eight-speed automatic and all-wheel drive.

Every X7 rides on an air suspension with adaptive dampers, and the chassis can be further enhanced with the available rear-axle steering and active anti-roll bars that reduce body motions. Both features are standard on the M60i, which has a sportier suspension setup by default. The smallest wheels on the X7 measure 21 inches in diameter, but BMW now also offers 23-inchers for the first time.

The 2023 X7 has updated powertrains, and BMW hasn’t yet released fuel-economy ratings for them yet. Once those estimates are announced, and we have the opportunity to test the new variants on the 75-mph highway fuel-economy route that is part of our extensive testing regimen, we can evaluate the SUV’s real-world mpg. For more information about the X7’s fuel economy, visit the EPA’s website.

Inside, the X7’s dashboard is dominated by a massive digital display that’s slightly curved. The panel boasts a 12.3-inch gauge cluster for the driver and a 14.9-inch touchscreen that the infotainment system operates through. Plenty of luxury features can be found inside as well, including heated front seats, a panoramic sunroof, a power-adjustable steering wheel, and ambient interior lighting.

However, we were irritated by how slowly the power-operated, second-row captain’s chair moved when trying to let people in and out of the third row. Likewise, the way-back seats aren’t especially roomy for adults during prolonged drives. Still, no one will complain about the X7’s ample interior cubby storage. While we only managed to fit three carry-on suitcases behind the third row, we fit 33 total with all the back seats stowed. 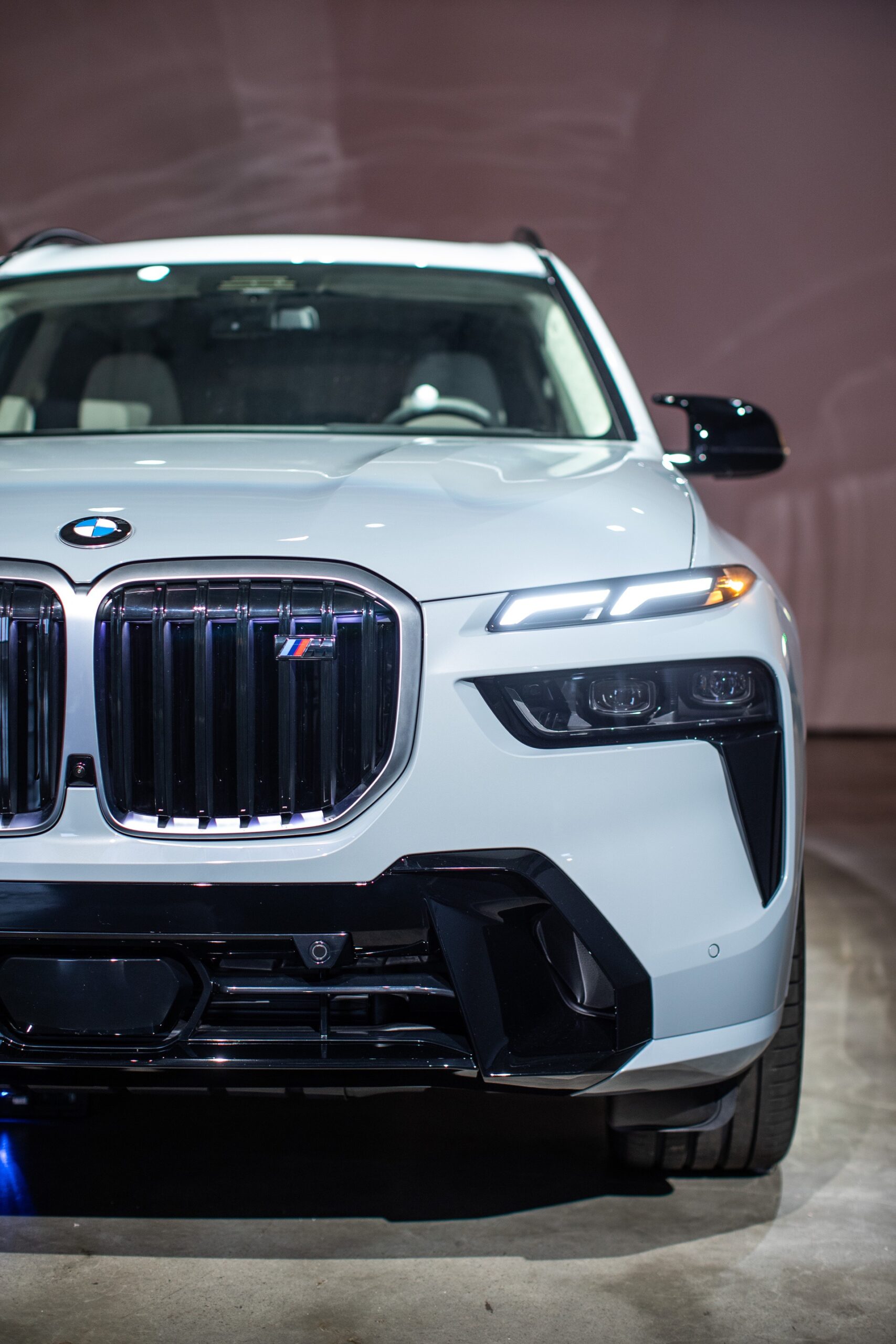 Just days after its unveil, the new 2023 BMW X7 Facelift landed in New York for a special preview behind closed doors. The refreshed X7 was introduced alongside the new BMW 7 Series and i7 since they all share same design language. And that design language starts with the split headlights which are now part of the BMW upper class of cars. 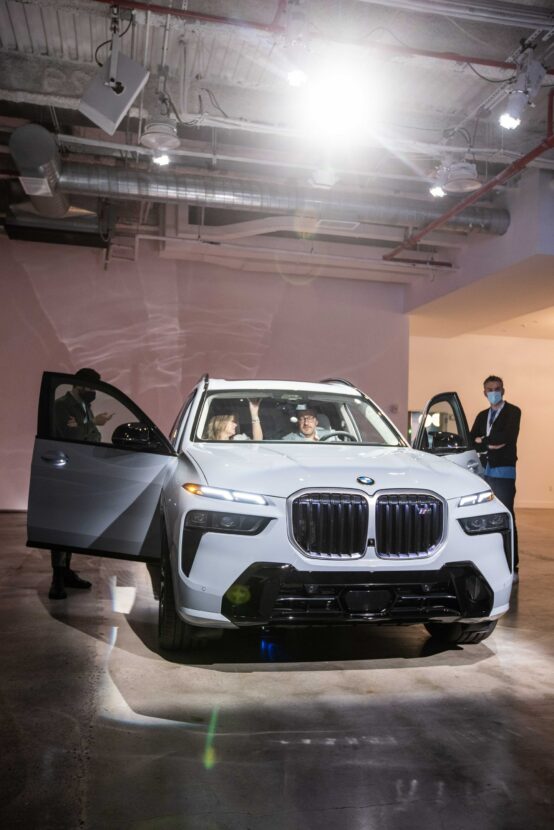 The headlights are now split into two halves, upper and a lower. The upper half features a modern, slimmer take on the signature dual-halo BMW headlight design, by offering two slim, upside down hockey stick LEDs. Out back, the BMW X7 LCI’s taillights are nearly identical to the pre-LCI taillights, except they have a bit more depth and are darker in color.

Inside, the BMW X7 Facelift gets some new tech and a couple of interesting features. The main update you’ll notice is the massive new iDrive 8 screen, borrowed straight from the BMW iX. Not only is it the same screen but it’s implemented the same way, with a floating design, so it now hangs over the expansive piece of wood trim on the dashboard. 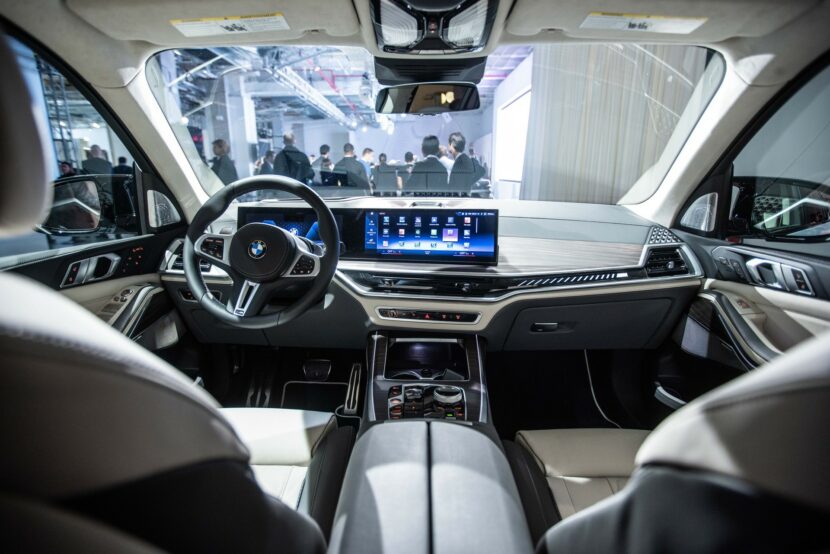 Along with the iDrive 8 screen, the BMW X7 LCI now gets the same new digital dials as the iX, which is joined with iDrive 8 to make one massive screen. More subtle updates include the light bar on the passenger side of the dashboard, which reads “X7”, and the iX-style shift toggle, which replaces the old shift lever.

If you thought BMW’s design philosophy couldn’t get any more bolder, the 2023 X7 will prove you wrong

At this year’s New York Auto Show, BMW introduced its most anticipated luxury SUV – the X7 – which received a mid-cycle makeover. The 2023 model year comes with all the necessary changes to make it look modern for at least the next five years. Available in three models: the xDrive40i, the M60i, and the upcoming Alpina XB7, the entire X7 range is now powered by a mild-hybrid powertrain.

The exterior design is not being taken seriously in the automotive world, but whether like it or not, it is the most aggressive-looking X7 to date. All the models now feature adaptive air suspension and an all-wheel-drive system. The interior is refreshed completely. You now get a new dashboard design with two curved screens which are reminiscent of the all-electric iX. As a whole package, the 2023 BMW X7 looks promising. It will compete with the Jeep Wagoneer and the Mercedes-Benz GLS-Class.