Tesla might grab the headlines, but Hyundai Motor Group is the quiet achiever in the race for domination of the EV mass market in America. Thanks to well-built, well-equipped, and well-priced models such as the Hyundai Ioniq 5 and Kona Electric, the Kia EV6 and Niro EV, and the newly launched Genesis GV60, Hyundai Motor Group snared the No. 2 spot in the U.S. electric vehicle market earlier this year, ahead of Ford, Nissan, and Volkswagen.

To be sure, Hyundai Motor Group is still a long, long way behind Tesla in terms of overall EV sales numbers. But there’s no denying the company’s soaring ambition in the segment.

The Hyundai Ioniq 6, which goes on sale here in the first half of 2023, marks one more step in a relentless march that will see Hyundai spend $16 billion on launching more than 30 EV models by 2030 as it targets electric vehicle sales of 3 million vehicles a year.

The company is also spending $5.54 billion on its first dedicated EV factory, to be built near Savannah, Georgia. The factory will be designed to produce up to six EV models for the U.S. market by 2028, including the yet-to-be-seen Hyundai Ioniq 7, a roomy three-row electric SUV that should arrive for 2024, as well a Kia EV pickup reportedly set to go on sale in the first half of 2026.

But first, meet the Ioniq 6.

In simple terms, the Ioniq 6 is the production version of the swoopy Prophecy concept unveiled in 2020. Under the skin is Hyundai Motor Group’s impressive E-GMP EV platform, which underpins both the Hyundai Ioniq 5 and Kia’s EV6 and features the company’s fast-charging 800-volt electrical architecture.

Hyundai hasn’t announced powertrain details yet, but it’s logical to assume the Ioniq 6 will come with the same electric motor and battery pack configurations as the Ioniq 5. That means a rear-drive model with a 225-hp, 258-lb-ft motor powered by a choice of 58-kWh or 77.4-kWh battery packs, plus an AWD model with the bigger battery pack and a 99-hp, 188-lb-ft motor at the front axle to bring the total output to 320 hp and 446 lb-ft.

The Ioniq 6 measures 116.1 inches between the axles, neatly splitting the difference between the Ioniq 5, which has a 118.1-inch wheelbase, and the EV6, which rolls on a 114.1-inch wheelbase. The original plan had been for the Ioniq 6 to share the EV6’s wheelbase, Hyundai Styling Group head Simon Loasby says, but the designers fought hard for the extra inches to improve the car’s proportions.

The wheelbase stretch delivered one other important benefit: more room for rear passengers. Although 5 inches shorter overall than a Honda Accord, the Ioniq 6 boasts almost limousine levels of rear knee- and legroom, though the battery pack means the seat bottom is closer to the flat floor than in a vehicle with an internal combustion engine.

One of the original names considered for the Ioniq 6 was Streamliner, Hyundai’s head of global design, SangYup Lee, says. “We decided on Ioniq 6, but I always see a Streamliner badge underneath,” jokes Lee, who referenced images of iconic wind-cheating cars such as the Stout Scarab and Phantom Corsair from the late 1930s and the 1947 Saab 92 during the media preview for the new Hyundai.

“It’s a simple, reductive design,” Lee says of the Ioniq 6’s slippery silhouette, with its low hood, cab-forward stance, and swooping greenhouse. “It’s a pure volume, a proportion you cannot do with an internal combustion engine vehicle.”

And it doesn’t just look like a wind cheater: Every surface of the Ioniq 6 has been honed in the wind tunnel to help deliver a claimed drag coefficient of 0.21, which would make the Ioniq 6 as slippery as a Tesla Model 3.

Cool details abound. The top element of the rear end, which vaguely echoes the form of a vintage Porsche 911’s whale tail spoiler, has a pixel light graphic that rolls over onto its upper surface. The way the rear fenders flow inward toward the upper surface of the trunklid recalls forms found on both old 911s and a Bangle-era BMW 6 Series. Lee’s team tried everything to get rid of the shark-fin antenna on the roof, but when they found they couldn’t for technical reasons, they made it from a dark, translucent material so you can glimpse the electronic hardware within.

But the relentless pursuit of the streamliner ethic has resulted in a couple of awkward design details, like the cutline in the C-pillar, an inevitable byproduct of the need to have a trunklid that extends to the top of the rear fenders. Then there’s the way the rear door cutline extends into roof side rails to allow for the framed door uppers, done to improve rear entry and egress. They’re minor quibbles, and on a dark-colored car, they won’t be noticeable. In person, the Ioniq 6 has a striking presence.

The Ioniq 6’s spacious, well-equipped interior has a premium ambience that makes Volkswagen’s ID4 interior look cheap and all the Tesla cabins look spartan. Variable ambient lighting is standard, but the light is bounced off the surfaces of the door panels, so you don’t see the light sources. There’s no Hyundai emblem on the steering wheel, just four pixels that change color: white when voice activation is used and green to show the car is charging.

The digital instrument panel is a 12.0-inch display, with a second 12.0-inch touchscreen for the infotainment system above the center console. As America will get conventional rearview mirrors rather than the cameras available in other markets, there won’t be screens on the wings that flare up at either end of the dash. Two interior trims will be available, both using a variety of sustainable materials, including fabrics from recycled plastics, recycled fishing net carpets, and leather dyed using flaxseed oil.

Hyundai is offering a total of 12 exterior paint colors on the Ioniq 6, including gold and green matte finishes that use bamboo charcoal pigments, though it’s not certain how many of these will make it stateside. Depending on spec, the Ioniq 6 will be fitted with either 18-inch wheels and 225/55 tires or 20-inch wheels with 245/40 tires.

Hyundai sources say the Ioniq 6 will be priced under the smaller Tesla Model 3 when it goes on sale next year, which suggests a starting price of less than $48,000 for the entry-level rear-drive model. Hyundai considers Tesla a luxury brand, and in terms of its pricing and customer perception in the U.S., that’s a fair assumption. But the Ioniq 6, which is a Model 3 and Model S tweener in terms of its overall size with a roomier back seat than either, looks just as upscale as either of Elon’s sedans.

It also looks to be a great value and another head-turning design, both of which are quickly becoming Ioniq brand calling cards.

A few years ago, Hyundai foretold its future: sleek and electric, with design cues pulled from classic and modern inspiration. That was the Prophecy concept, first shown in March 2020. As with all augury, there’s room for interpretation. But our first look at the Ioniq 6, the production car based on the concept, reveals a smooth sedan that clearly references both retro and futuristic influences.

The Ioniq 6 follows the Toyota Prius–like Ioniq and the Ioniq 5, an SUV with 8-bit charm. The Ioniq 6 has a lot to live up to, as both the 5 and the Prophecy concept garnered rave reviews. Both the 5 and the 6 ride on the Hyundai E-GMP dedicated electric platform, shared with the Kia EV6 and the Genesis GV60. The Ioniq 6 rides a little higher than the Prophecy concept, a reality of transferring the vision to a production and street-legal platform.

DIGITAL SIDE-VIEW MIRRORS OFFER A GLIMPSE OF THE FUTURE, THOUGH U.S. REGULATIONS MEAN WE

To give the Ioniq 6 a distinctive look, Hyundai designers say they echoed the streamlined cars of the ’30s. Modern influences seem to be Porsche and Tesla; there’s a faint wisp of Taycan and Model 3 in the front end, and the rear spoiler kicks up like a nod to a ducktail Porsche 911. As promised, it’s a mix of classic and contemporary.

Hyundai design chief SangYup Lee shared his thoughts on the pressures, and rewards, of melding brand personality with brand-new technology.

Lee has penned everything from Chevrolet Camaros and Corvettes to the Bentley Continental GT. He began his design career 27 years after leaving South Korea, following an education at the ArtCenter College of Design in Pasadena, California. Fifteen brands and eight countries later, in 2016, he returned to South Korea to head Hyundai and Genesis design. Along with Luc Donckerwolke, chief creative officer of Genesis and Ioniq, Lee draws novel designs with upscale flair to help Hyundai and Genesis stand out in both the mainstream and luxury markets.

THE HEAD- AND TAILLIGHTS USE LEDS. THERE IS ALSO A SUBTLE STRIP OF SIX BULBS IN THE FRONT BUMPER THAT INDICATE CHARGE LEVEL.

We asked Lee, who’s often overseeing dozens of projects at any given time, how he approaches a Hyundai car as opposed to an upmarket Genesis. Hyundai, he says, views its vehicles like chess pieces. “King, queen, bishop, and knight, they all look different and move differently, but they function as a team,” he says. While a lot of OEMs create a design and then offer it in different sizes like Russian nesting dolls, Lee says Hyundai looks at its customers’ lives: “A big family has different needs than Gen Z.” Lee wants the styling to be distinct, too. 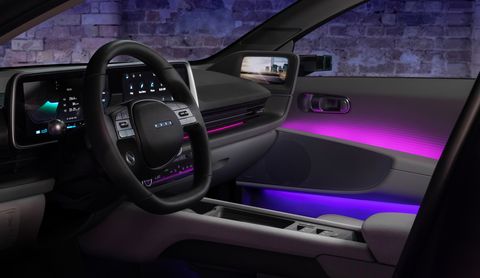 THE IONIQ 6 INTERIOR IS ALL ABOUT GLOW AND FLOW. WITH TOUCHES LIKE MOOD LIGHTING AND SMOOTH DOOR PANELS THAT SEAMLESSLY INCORPORATE SPEAKERS, IT’S A SIMPLIFIED, BUT NOT BARREN, SPACE.

So far, the Ioniq line has achieved the retro-futurist objective it set. The Ioniq 6 feels thoroughly modern and fresh. The interior is uncluttered and elegant. No frilly edges, chrome, or faux chrome. No piano black. Just simple and straightforward. When envisioning the interior, Lee and the team were aware of both the interest in newer tech and the usability of it. “We’re pushing to touchscreens, but they can be dangerous when you’re moving,” he says. “So we want the right balance. In the future, voice activation will play a bigger role, but we’re transitioning right now. If it’s safer, there will be buttons.”

If Hyundai is the mainstream and Genesis the luxury, Ioniq, for now, represents the most daring of the company’s offerings.

THE HYUNDAI TEAM EXPERIMENTED WITH WHEEL DESIGNS FROM FLAT AERODISCS TO BLADED MULTISPOKES.