The fiftieth anniversary festivities of the Renault 5 continue. The famous R5 is entitled to a declination called Diamond. Imagined by the designer Pierre Gonalons, this reinterpretation uses materials such as marble or horsehair. It also contains under its hood an electric motor.

Fifty years is something to celebrate. The Renault 5 celebrates this anniversary in 2022, it was launched in 1972. For the occasion, the French manufacturer is entering into a partnership with designer and interior designer Pierre Gonalons. The latter delivers his own interpretation of the famous city car. Renamed Renault 5 Diamant, the small car becomes a show car – exhibition version of a concept car – fully electric.

In order to design this new version of the Renault 5, Pierre Gonalons says he was inspired by the decorative arts, and in particular by high jewelry. If the original design of the Renault 5 is retained, the city car has some specific details. First of all, there is this body color, made using a tri-layer paint “made of golden pigments on a pink base”. The paint is then “covered with a frosted varnish” to achieve a changing appearance. Exposed to the sun, the Renault 5 Diamant is adorned with golden reflections, while in the shade, it takes on bluish shades.

A meeting between the automobile and architecture 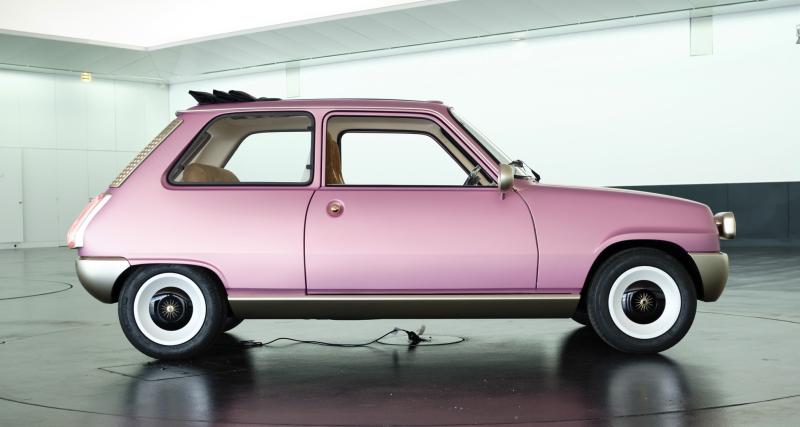 The Renault 5 Diamant also sees its lines clean, and some elements modified. Headlights and lights come out of their location for example. The wheels come from the Alpine model, they are “smoothed and signed in their center of the sun dear to Pierre Gonalons”.

The designer talks about this collaboration and his taste for the Renault 5:

I am very honoured by Renault’s invitation to reinvent the legendary R5 on the occasion of its fiftieth anniversary. The brand gave me carte blanche to design the car of my dreams. The R5 embodies in my eyes a pop, optimistic, resolutely contemporary life, and with Renault 5 Diamant I wanted to pay tribute to its revolutionary design while translating my universe of shapes and colors into the automotive world.

A funny steering wheel made of recycled marble 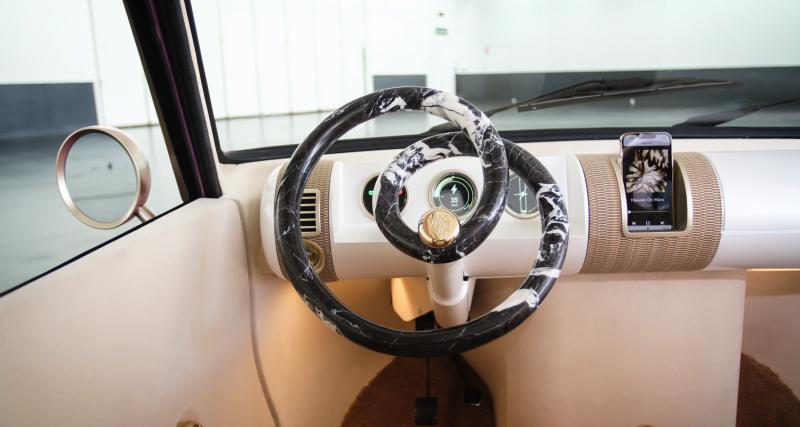 Inside, Pierre Gonalons makes the steering wheel with recycled French marble worked in a tubular way. The door handles, the window lift controls or the gear lever from a truncated sphere in brass gilded with pale gold. A slot is specifically reserved for a smartphone on the dashboard, which is made of horsehair fabric. Floor mats are made of mohair wool. The designer has surrounded himself with the Colors and Materials department of the Renault design center as well as French companies such as Le Crin, Pinton or Bertin-Aubert to design this interior. 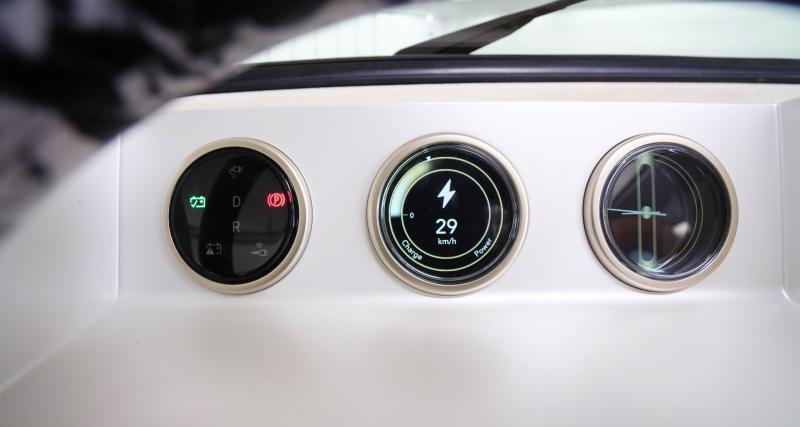 Renault does not communicate the specificities of the electric engine that equips this new Renault 5 Diamant. It is known, however, that the gear lever can be operated in three sequential positions, namely forward, neutral and reverse. The driver has three round digital meters in front of him, which display the speed, time and charge level of the battery. The doors open using a fingerprint reader.

The Renault 5 Diamant signed Pierre Gonalons is the subject of an NFT collection unveiled in September 2022. The single copy of the car and its double in NFT format are on auction in 2022.

Who said the Renault 5 couldn’t be a luxury car? On the occasion of its fiftieth anniversary, the famous city car in Le Losange is reworked by the designer and interior designer Pierre Gonalons. In addition to an electric engine whose technical sheet remains unknown, this Renault 5 Diamant adopts a pink and gold tri-layer paint. It also sees its headlights and lights come out of their locations.

Minimalist, the cabin contains a funny steering wheel in recycled French marble, worked in a tubular way. Some elements like the gear lever are made of brass gilded with pale gold. The dashboard is covered with horsehair fabric, and the floor mats are made of mohair wool. This Renault 5 Diamant is auctioned at the end of 2022, with a virtual double in the form of NFT.